Functional rhinoplasty is to improve the breathing and appearance of nose both.

Surgeon has to know the professional knowledge of the anatomy, physiology, and function of the nose.

4) Acquired deformity due to trauma, tumor or infection

5) Narrowing, collapse or stenosis of the nasal valves

A functional rhinoplasty may be performed under different types of anesthesia depending on patient and physician preference, including local anesthesia (i.e. patient awake but with numbing medications) or intravenous sedation (i.e. twilight) or general anesthesia (i.e. completely asleep). 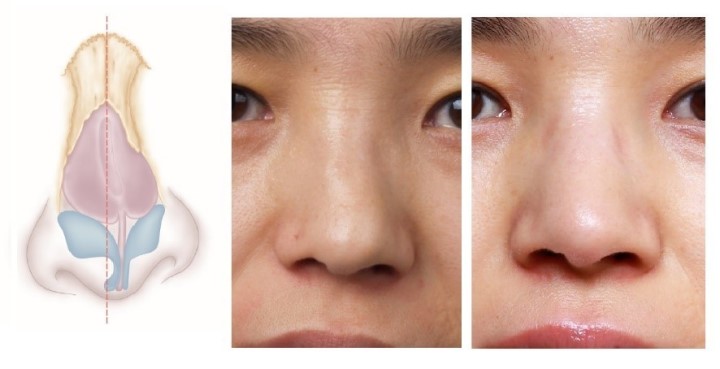 The nasal septum is a partition in the middle of a nose that plays a role as a nose pillar.

It divides the path of nasal breathing into right and left.

If the nasal septum has deviated, it causes nasal decongestion of the narrowed and aggravates rhinitis.

So, It can be improved by correcting deviated nasal septum during rhinoplasty.

Nasal valve is a narrow area of a nose’s upper roof part that balances air flow coming into nasal septum and nose.

<Left side and Right side of Nasal valve> Photo by Dr. Jin Hong-Ryul

If the nasal valve is clogged, you cannot feel the clearance.

So. The nasal valve can be improved by correcting during rhinoplasty.

Rhinitis is caused by various factors.

If you have rhinitis, inner nasal mucosa gets thicker and hypertrophic rhinitis, which enlarge concha nasalis inferior, can outbreak.

In most cases, the widening method is used.