Facelift surgery , clinically known as rhytidectomy, is a procedure used to reduce the appearance of facial wrinkles and other telltale signs of aging, with the goal of improving the overall appearance of the face and jaw.

Facelift surgery can help to reverse the harmful effects of time, stress, and exposure to the elements.

To perform this procedure, a facial plastic surgeon will lift and tighten the underlying muscles of the face to create more aesthetically pleasing contours appearance and rejuvenate the facial structure.

Then he or she will remove excess pockets of fat and skin that can contribute to an aged, tired appearance.

An experienced, skilled plastic surgeon will perform this procedure with an artistic eye and extraordinary attention to detail so that patients will be left with negligible scarring and beautiful, natural-looking results.

In addition to traditional full facelifts, there are several other variations of the procedure to address specific areas of the face.

Many surgeons use advanced, minimally invasive techniques to minimize discomfort and downtime.

For qualified patients, facelift surgery can be an excellent investment, providing a fresher, more youthful appearance for years to come.

A long-term follow-up study published in 2014 found that after an average follow-up of 12.6 years, 68.5 percent of face lift patients rated their current degree of improvement as very good or beyond expectations, and an equal number felt that 10 or more years had been added to their youthful appearance.

According to the most recent 2011 statistics from the American Society for Aesthetic Plastic Surgery, facelifts were the sixth most popular aesthetic surgery performed after liposuction, breast augmentation,abdominoplasty (tummy tuck), blepharoplasty (eyelid surgery) and breast lift.

Many different procedures of rhytidectomy exist. The differences are mostly the type of incision, the invasiveness and the area of the face that is treated.

At a consultation the procedure with the best outcome is chosen for every patient.

Expectations of the patient, the age, possible recovery time and areas to improve are some of the many factors taken in consideration before choosing a technique of rhytidectomy.

In the traditional facelift, an incision is made in front of the ear extending up into the hairline.

The incision curves around the bottom of the ear and then behind it, usually ending near the hairline on the back of the neck.

After the skin incision is made, the skin is separated from the deeper tissues with a scalpel or scissors (also called undermining) over the cheeks and neck.

At this point, the deeper tissues (SMAS, the fascial suspension system of the face) can be tightened with sutures, with or without removing some of the excess deeper tissues.

The skin is then redraped, and the amount of excess skin to be removed is determined by the surgeon’s judgement and experience.

The excess skin is then removed, and the skin incisions are closed with sutures and staples.

The technique of a SMAS facelift, consisting of mobilisation, repositioning and fixating.

The SMAS (Superficial Musculo Aponeurotic System) layer consists of suspensory ligaments that encase the cheek fat, thereby causing them to remain in their normal position.

Resuspension and securing the SMAS anatomical layer can lead to rejuvenation of the face, by counteracting aging and gravity caused laxity.

Modifications to this technique led to development of the “Composite Facelift” and “Deep plane Facelift.”

In order to correct the deepening of the nasolabial fold more accurately, the deep plane facelift was developed. Differing from the SMAS lift by freeing cheek fat and some muscles from their bone implement.

This technique has a higher risk at damaging the facial nerve.

The SMAS lift is an effective procedure to reposition the platysma muscle; however, the nasolabial fold is according to some surgeons better addressed by a deep plane facelift or composite facelift.

As well as in the deep plane facelift, in the composite facelift a deeper layer of tissue is mobilised and repositioned.

The difference between these operating techniques is the extra repositioning and fixation of the orbicularis oculi muscle in the composite facelift procedure.

The malar crescent caused by the orbicularis oculi ptosis can be addressed in a composite facelift.

The mid face area, the area between the cheeks, flattens and makes a woman’s face look slightly more masculine.

The mid face-lift is suggested to people where these changes occur, yet without a significant degree of jowling or sagging of the neck.

In these cases a mid face-lift is sufficient to rejuvenate the face opposed to a full facelift, which is a more drastic surgery.

The ideal candidates for a mid face-lift is when a person is in his 40s, or if the cheeks appear to be sagging and the nasolabial area has laxity or skin folds. To achieve a younger appearance the surgeon makes several small incisions along the hairline and inside the mouth, this way the fatty tissue layers can be lifted and repositioned.

This way there are practically no scars. The fatty layer that lies over the cheekbones is also lifted and repositioned.

This improves the nose-to-mouth lines and the roundness over the cheekbones.

The mini-facelift is the least invasive type of facelift which is similar to a full facelift, the only difference is the omission of the neck lift in the mini lift procedure.

It is also called the ‘S’ lift because of the shape of the incision that is used or the ‘short-scar’ facelift.

This lift is a more temporary solution to the ageing of the face which also has less downtime and is done on people who have deep nasolabial folds, sagging facial structures, yet still have a firm and well-contoured neck.

The position of the incision is usually made from the hairline around the ear with scars hidden in the natural crease of the skin.

The mini lift can be performed with an endoscope, which is used to reposition the soft tissues. After this, the skin is repositioned by the surgeon with small sutures.

This type of lift is a good alternative to the full facelift to people with premature ageing. 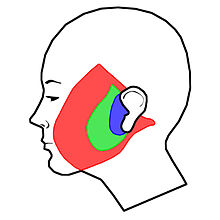 Blue represents the incisions in the Skin only facelift. Green represents the S-lift. Red is the extensive undermining done in several facelift techniques.

The thread lift or feather lift is a less invasive surgical option, which is often used for people who seek minor improvements to treat sagging or laxity in the eye, forehead, and nasolabial fold areas.

The lift can be performed under local anesthesia, where the surgeon uses a barb suture technique.

The threads that hold the skin in place will not be reabsorbed or be dissolved and remain in place.

The thread plus the barbs are the only things keeping the lift in effect, as no skin is cut away.

Specific complications of the thread lift include puckering skin, the visibility of the threads and the appearance of lumps.

Treatment for these effects range from oral medications to surgical intervention.

A study by Abraham RF suggest that the long-term effects of this procedure are less esthetically pleasing than other surgical options.

The subperiosteal facelift technique is done by vertically lifting the soft tissues of the face, completely separating it from the underlying facial bones and elevating it to a more esthetically pleasing position, correcting deep nasolabial folds and sagging cheeks.

The technique is often combined with standard techniques, which provide a long-lasting rejuvenation of the face and is done in all age groups.

The difference between this and other lifts is that the subperiosteal facelift has a longer period of facial swelling after the procedure.

With the skin-only facelift only the skin of the face is lifted and not the underlying SMAS, muscles or other structures.

The skin itself lacks the elasticity and laxity in older patiënts, that is why the longevity of this lift is short, usually the lift re-sags within 6 to 12 months after the procedure.

The reason that this option is considered is that it has fewer complications and isn’t as technically demanding as the SMAS or other types of lifts.

A possible alternative method for performing this type of facelift, is through the use of a spiral needle; depending on the thickness of the lifting area, the choice of needle diameter plus the optimization of the depth at which the treatment is performed enables the surgeon to determine the tightness of the lift itself.

The term MACS-lift – or Minimal Access Cranial Suspension lift – allows for the correction of sagging facial features through a short, minimal incision, elevating them vertically by suspending them from above.

There are many advantages to having a MACS facelift versus a traditional facelift.

For starters, the MACS-lift uses a shorter scar that is in front of the ear, instead of behind, which is much easier to hide. Overall, the MACS-lift surgery is safer because less skin is raised.

This means that there is less risk of bleeding and nerve damage.

The operation also takes less time, lasting 2.5 hours instead of the 3.5 hours that the traditional facelift requires.

There is also a shorter recovery period, 2–3 weeks instead of 3–4 weeks.

Finally, the results of the MACS-lift are very natural while the traditional facelift will often result in a “windswept” look. The MACS lift has been successfully used for to correct complication after thread-lift with APTOS

The most common complication can be bleeding which usually requires a return to the operating room. Less common, but potentially serious, complications may include damage to the facial nerves and necrosis of the skin flaps or infection.

Although the facial plastic surgeon attempts to prevent and minimise the risk of complications, a rhytidectomy can have complications.

As a risk to every operation, complications can be derived as a reaction to the anesthetics.

Hematoma is the most seen complication after rhytidectomy.

Arterial bleeding can cause the most dangerous hematomas, as they can lead to dyspnea.

Almost all of the hematomas occur within the first 24 hours after the rhytidectomy.

Nerve injury can be obtained during rhytidectomy.

This kind of injury can be temporary or permanent and harm can be done to either sensory or motor nerves of the face.

As an sensory nerve, the great auricular nerve is the most common nerve to get injured at a facelift procedure.

The most injured motor nerve is the facial nerve.

Skin necrosis can occur after a facelift operation.

Scarring is considered a complication of facelift surgery. Hypertrophic scars can appear.

A facelift requires skin incisions; however, the incisions in front of and behind the ear are usually inconspicuous.

Hair loss in the portions of the incision within the hair-bearing scalp can rarely occur.

A hairline distortion can result after undergoing a rhytidectomy. Especially facial hair by men after a facelift procedure.

There is a high incidence of alopecia after rhytidectomy.

The permanent hair loss is mostly seen at the incision site in the temporal areas.

In men, the sideburns can be pulled backwards and upwards, resulting in an unnatural appearance if appropriate techniques are not employed to address this issue.

Achieving a natural appearance following surgery in men can be more challenging due to their hair-bearing preauricular skin. In both men and women, one of the signs of having had a facelift can be an earlobe which is pulled forwards and/or distorted.

If too much skin is removed, or a more vertical vector not employed, the face can assume a pulled-back, “windswept” appearance.

This appearance can also be due to changes in bone structure that generally happen with age.[2]

One of the most often overlooked (or not discussed) areas of a traditional facelift procedure is the effects on the anatomical positioning and angles of the ears.

Most patients are, in many cases, not made aware that the vector forces in a facelift will lower the ears as well as change the angle of the ears.

Infection is a rare complication for patients who have undergone a rhytidectomy.

Staphylococcus is the most usual causative organism for an infection after facelift surgery.